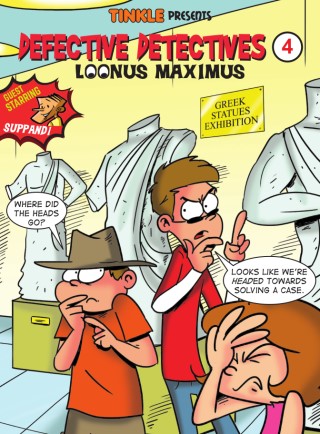 Rahul and Ravi, the infamous Defective Detectives, are a pair of wannabe detectives who are trying to solve any and every mystery. And if there is no mystery, rest assured they will invent one! They give each other pretentious and hilarious code names and see a conspiracy under every leaf and stone.
In this Collection, the Defective Detectives are after a stolen sword and a missing crown. They also have a new rival to take down along with someone trying to sabotage their society event. Plus! They have to uncover a secret in asea cave and clear a really tough level inside a video game! This Collection is sure to have you howling with laughter as you ride along with Rahul and Ravi on their many (mis)adventures. Joining them is Tinkle’s loveable goof—Suppandi with his adventures!
So will the Defective Detectives solve all these mysteries before Ravi’s sister, Sam bursts their bubble? Find out in Defective Detectives 4: Loonus Maximus.