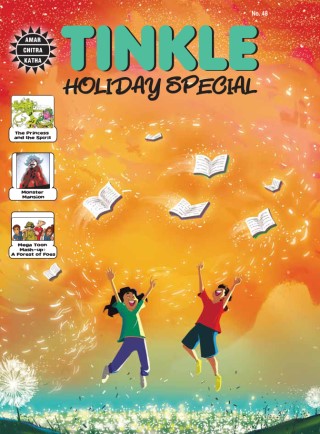 What’s special?
- Residents of planet Middipi are in danger. Someone is stealing their special powers. Find out if they can be saved in The Princess and the Spirit.
- Read about An Unlikely Friendship between a wolf named Wolf and Sirko, a dog. See how Wolf and Sirko help each other in this Ukranian folk tale.
- Join Saumya as she tries to solve The Multiplication Problem and stop the invading Binarians from taking over her spaceship.
- We're So Beautiful, say five children after they come across a sand fairy and make a wish to become beautiful. Read this adaptation of E. Nesbit's Five Children and It and find out if their wish helped them or instead caused them trouble.
- Arya is ready to challenge her brother to The Greatest Game. She thinks he is trying to scare her so she is going to prank him in return. Read this funny story to find out who wins.
- A group of ghosts have finally found their home in the Monster Mansion. But some humans want to turn it into an eerie art museum. Find out if the ghosts can scare the humans away.
- Will Simone, a maths and statistics nerd, help a basketball team win in A Game of Numbers?
- Somebody wants an atomic bomb. And somebody has helped Dr. Shastri, a nuclear scientist who can make the bomb, escape from prison. Join Arjun and his boss Sonia as they deal with The Masked Menace, hopefully before it is too late.
- Dive underwater and then fly along with Arya and the Finnish god Vainamoinen as they take down Louhi the sorceress and save the magical Sampo in Add Salt to Taste.
- Will Shikari Shambu, Suppandi, Bir and Bala be able to find the mysterious bearlionphant in a forest resort in Kerala? Or is something else brewing there? Find out in the Tinkle Mega Toon Mash-up A Forest of Foes.
- Don’t forget to keep an eye out for Tinkle’s cheerful goof, Suppandi who gets a job at a movie theatre in Movie Mania and makes a funny bucket list in Listed.
Plus!
A variety of cool puzzles and factoids brought to you by the Defective Detectives, WingStar, Doob Doob and more! There’s also a Bookkad book review of Worry Warts and a Fun Recipe to make your own Spaghetti Pizza!