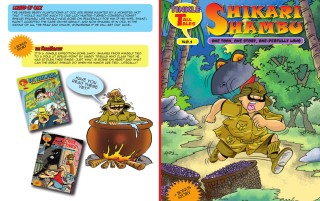 Tinkle Tall Tales No. 1: Shikari Shambu is the story of a famous Indian comic character named Shikari Shambu, who is known for his hat that is pulled till his eyes and his cowardly character, despite being a hunter. He is a lazy fellow but is perceived to be a brave hunter by everyone around him. Shikari Shambu lives with his wife, Shanti and, as per his nature, keeps trying to run away from getting into any trouble. But there is never a time when he doesn't fall into one problem after the other.

The news of Ozz has spread like wildfire. The place has been haunted by a monster that is hidden behind bushes and nobody can find a way to get rid of the fear that has been caused by the monster. Since he is supposed to be the right man for the job, Shikari Shambu is approached. But, being the lazy man that he is, Shambu isn't ready to take the job until his wife, Shanti, accepts the case on his behalf. Right from this moment on, the trouble starts for Shambhu. How this cowardly-natured hunter saves himself from the monster makes this tale highly interesting and enjoyable for young readers.