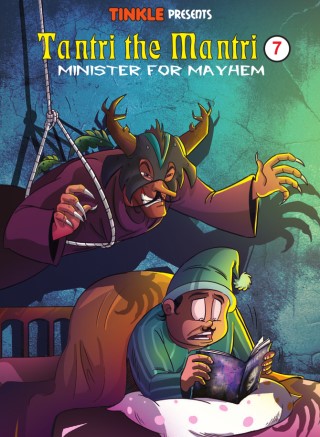 Tantri the Mantri 7 - Minister for Mayhem

Tantri is a minister at the court of King Hooja. He is the man who protects the King from danger and acts of treason -he is also the man behind them! Tantri wants to become the King of Hujli, by hook or by crook. But all his plans to get rid of Hooja backfire on him in the most comical and bizzare ways. Despite his never-ending attempts to grab the crown, the throne of Hujli remains a distant dream for Tantri, the evil Mantri. But this time Tantri is pulling all the stops! Read on as Tantri takes Hooja on a deadly trip to Europe, turns into a chicken and makes him relive his worst nightmares! And that’s not all! Tantri also turns back the tide of time in his quest to win the throne of Hujli! Surely, after going to such lengths the throne cannot be far from Tantri’s reach, can it? It's time to find out! Brace yourself for this rollercoaster of a collection- but make sure Tantri hasn't loosened its screws!