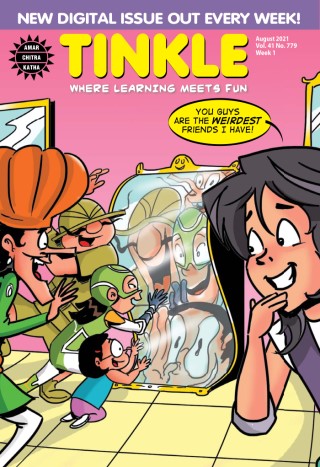 Tinkle has been India’s formative children’s magazine for the last 40 years. Every week, we publish comic stories, facts and features on a variety of topics from sports and craft to science and general knowledge that will inspire and inform you. You will meet our classic characters—Suppandi, the hilarious simpleton; Shikari Shambu, with his adventures in the jungle; and Tantri, the evil Mantri. Also waiting to see you are a number of new characters—Defective Detectives, two boys who see a conspiracy everywhere; Aadi and Nadia from the wonderful boarding school NOIS; and WingStar, Tinkle's superhero from the north-east.
In This Issue
&amp;gt; Shikari Shambu is on The Last Lap of his epic world tour. He wants to feast in Morocco, but someone else wants the Shambu special for lunch with extra Shambu on the side! Join him in the desert to find out more.
&amp;gt; Little Suppandi’s father has the perfect solution to work peacefully at home. Find out how that benefits his son in No Noise!
&amp;gt; The Defective Detectives have a new mission for which they will have to brave the city’s underground! As the world’s safety lies in their hands, find out if they succeed in Lesson… Unlearned.
Also Featuring:
The Defective Detectives are all geared up for the Olympics and they believe they can take down Sam with their trivia. Will they finally beat the Know-It-All? Find out in Olympic Awesomeness. And travel back to the 1928 Olympic Games and learn how Australian rower Henry Pearce overcame an interesting obstacle to set an example as The Gentleman Athlete.