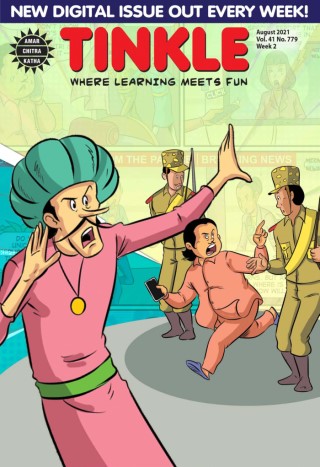 Tinkle has been India’s formative children’s magazine for the last 40 years. Every week, we publish comic stories, facts and features on a variety of topics from sports and craft to science and general knowledge that will inspire and inform you. You will meet our classic characters—Suppandi, the hilarious simpleton; Shikari Shambu, with his adventures in the jungle; and Tantri, the evil Mantri. Also waiting to see you are a number of new characters—Defective Detectives, two boys who see a conspiracy everywhere; Aadi and Nadia from the wonderful boarding school NOIS; and WingStar, Tinkle's superhero from the north-east.
In This Issue
> Monty is having a really hard time concentrating in his online class. But when some Detention Drama looms over his head, he realizes that he’s not the only one.
> Suppandi the Valiant Volunteer is faced with a challenge at an animal shelter. Read the story to find out if he overcomes it.
> Someone has been spreading bizarre fake news stories about Raja Hooja. Join Tantri the Mantri who has taken it upon himself to solve this mystery in Have You Heard The News?
Also Featuring:
Join Jagannath Halbe as he shares some rib-tickling puns in Pun-A-Thon. And don’t forget to See and Smile! Read some interesting and funny real-life incidents sent by our readers in It Happened To Me. And learn some interesting facts that Angelina and Tashi have found about inventions in Top That!: Incidental Inventions.