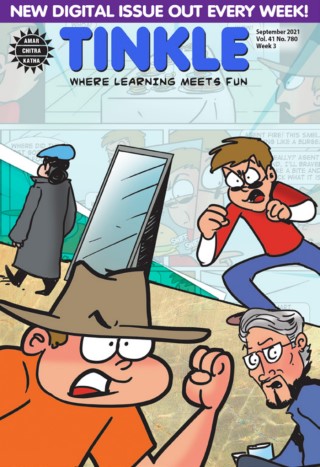 Tinkle has been India’s formative children’s magazine for the last 40 years. Every week, we publish comic stories, facts and features on a variety of topics from sports and craft to science and general knowledge that will inspire and inform you. You will meet our classic characters—Suppandi, the hilarious simpleton; Shikari Shambu, with his adventures in the jungle; and Tantri, the evil Mantri. Also waiting to see you are a number of new characters—Defective Detectives, two boys who see a conspiracy everywhere; Aadi and Nadia from the wonderful boarding school NOIS; and WingStar, Tinkle's superhero from the north-east. In This Issue 1. Ina Mina Mynah Mo have set up some pranks to deal with their pesky cousins. But will all go to plan? Check out Prankaroo Switcharoo to know more. 2. Suppandi is not pleased with a Tinkle Toon who is also an avid photographer. Check out Photo Finish to learn who our special guest is this time and why he is frustrating Suppandi! 3. The Defective Detectives are touring a movie set. But instead of spotting an actor, they have found an angry ghost! Read Celluloid Capers to know if they expose this supernatural threat before it’s too late. Also Featuring: Based on a Japanese folk tale, Drinking the Sea Dry is about the Chief of the Upper Current of the River who tries to overcome a strange challenge set by the Chief of the Mouth of the River. Join the Tinkle Team in a game of name, place, animal, thing in NPAT with the letter S.