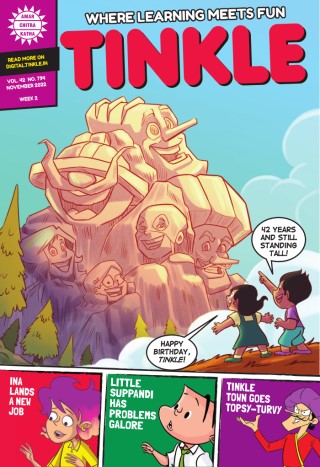 In This Issue
1. Why is a Halbe girl Clowning Around in a mall? Find out what Ina Mina Mynah Mo are up to this Children's Day!
2. Laugh out loud as you learn about Little Suppandi’s solution to all his concerns in Problems Galore.
3. Tag along with The Misfits Club as they try to beat their school bullies in a Tinkle-themed Children’s Day treasure hunt!
4. Tantri has finally become king, the Halbe sisters have won a lottery, the DD have caught Sam the alien and more! Will they be happy living their new lives or does evil await? Find out in Tinkle’s anniversary special—The Toon’s Story.
Also Featuring:
Celebrate Tinkle’s anniversary and learn how to make your own Tinkle Trinkets in Do-It-Yourself! Learn some interesting facts the Suppandi and Shambu have found about their fellow Tinkle Toons in Top That!: It’s a Toon Affair!
ABOUT TINKLE
Tinkle has been India’s formative children’s magazine for the last 40 years. Every week, we publish comic stories, facts and features on a variety of topics from sports and craft to science and general knowledge that will inspire and inform you. You will meet our classic characters—Suppandi, the hilarious simpleton; Shikari Shambu, with his adventures in the jungle; and Tantri, the evil Mantri. Also waiting to see you are a number of new characters—Defective
Detectives, two boys who see a conspiracy everywhere; Aadi and Nadia from the wonderful boarding school NOIS; and WingStar, Tinkle's superhero from the north-east.