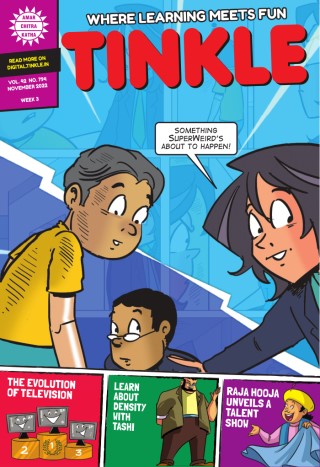 "In This Issue
1. Join Aisha in a Tinkle-themed fancy dress competition where she uncovers something untoward and meets a strange SuperWeirdo in Chitter! Chitter!
2. Ever wondered how you television works? Join Angelo and Angelina in Tinkle Explains: Behind the Screens.
3. Hujli is preparing for International Television Day and Tantri the Mantri is all set to bump off Hooja! Will he succeed before Hooja’s little furry friend internvenes in TV Tales?
Also Featuring:
Join Tinkle’s resident goofball as he answers some interesting questions sent by readers in Ask Suppandi. Enter Tashi’s Lab to perform a cool, science experiment about Demonstrating Density.
ABOUT TINKLE
Tinkle has been India’s formative children’s magazine for the last 40 years. Every week, we publish comic stories, facts and features on a variety of topics from sports and craft to science and general knowledge that will inspire and inform you. You will meet our classic characters—Suppandi, the hilarious simpleton; Shikari Shambu, with his adventures in the jungle; and Tantri, the evil Mantri. Also waiting to see you are a number of new characters—Defective Detectives, two boys who see a conspiracy everywhere; Aadi and Nadia from the wonderful boarding school NOIS; and WingStar, Tinkle's superhero from the north-east."